The world of mobile application development today offers a large number of choices for creating fully native apps or developing cross-platform apps. Both these approaches have their advantages.

Most people believe that all cross-platform frameworks work identically, and also that the choice to pick one above the other should be based on the idea and assumption that which one suits them better and they are comfortable with.

It can become a complex choice while choosing – NativeScript vs Ionic vs React Native, which of the following would serve as the most reliable cross-platform framework.

It has been a challenge as developers had to compromise either on user-friendliness or performance – in exchange for lower development times and costs.

But, with the arrival of frameworks like NativeScript or Ionic vs React Native, these limitations no longer exist.

Now, developers can create native apps with flawless performance and a single codebase and can likewise utilize some parts of that codebase across all platforms.

On the other hand, this also ensures the most powerful code compatibility with the original app feel and appearance.

Cross-platform engineering communities also aim to decrease any disadvantages that this development has, by regularly adding new tools and approaches.

Today, in this article we will look at NativeScript vs Ionic vs React Native, about them, their performance, comparison, and how they help create mobile applications, we will explore all the different comparison characteristics.

Ionic is a framework that strives to create PWA’s (Progressive Web Apps) and high-performance hybrid mobile apps with the help of CSS, HTML5, and Angular.

This Ionic framework essentially focuses on web design, UI interaction, or front-end user experience, which manages the feel and appearance of your app.

Developed by Drifty Co, Ionic requires a “PhoneGap/Cordova” wrapper to access native platform controllers and for delivering a “nativelike” experience, it utilizes WebView for rendering.

NativeScript is one of the widely-used open-source frameworks for developing front-end truly native mobile apps with the use of JavaScript, Angular, and Typescript.

Designed by Progress, this framework can instantly communicate with Native APIs so that you can access it through JS.

With the use of TypeScript or JavaScript, you can design one project that develops into an Android or iOS app with a fully native-like user experience. Examples of apps that utilize NativeScript include Regelneef, MyPUMA, etc.

What is React Native?

React Native is a JavaScript open-source framework. It is based on the React web framework created by Facebook. It enables you to develop native mobile apps with JavaScript and React.

But, its popularity extends considerably and it is also utilized by Tesla, Uber, Bloomberg, and Discord for their apps.

With its constantly growing reputation, React Native helps you build solid and appealing mobile apps with the use of JavaScript only, for both iOS and Android platforms, which also helps to save development time. 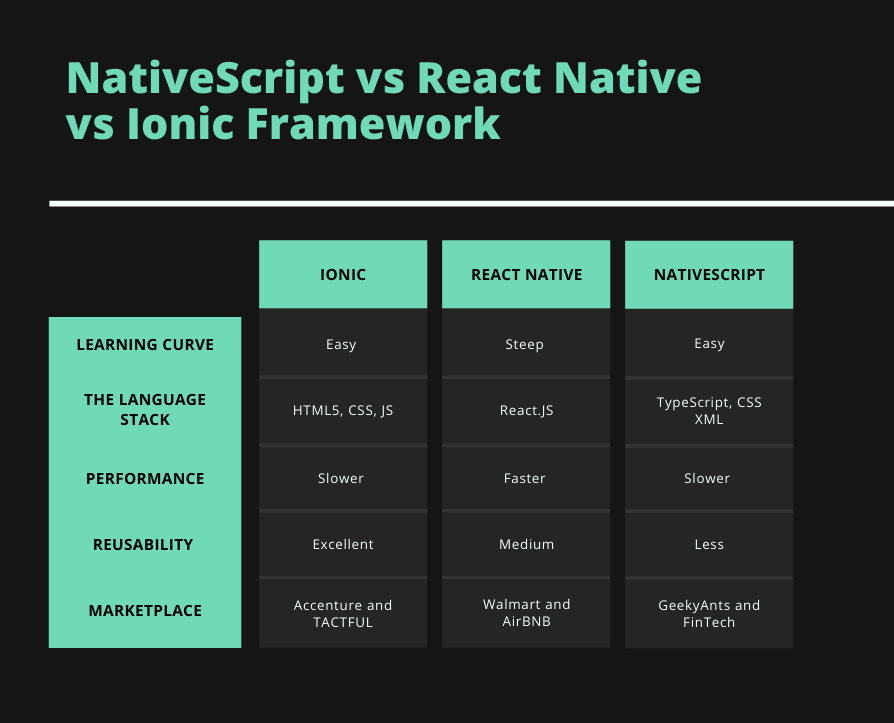 Now as we have introduced all three frameworks, let us move further to make a detailed comparison of these selected mobile app frameworks based on some important parameters:

Learning any new technology simply depends on the knowledge that you already have or some prior experience with the related technology.

If you have worked as a web developer and are familiar with JavaScript, CSS, and HTML5, it will be somewhat easy for you to begin with all three frameworks.

However, if you are evolving from a mobile development experience, then the learning curve here will become a bit steep for all these frameworks.

If talking comparatively among the three of them, then we would say that the Ionic framework is simple to learn and implement, plus it also has excellent documentation.

It also incorporates the advantages of React.JS, which is a web framework backed by Facebook.

Ionic is facilitated by several languages like JavaScript, HTML5, CSS, and JavaScript.

Developers use Ionic to develop applications that are wrapped by the Cordova wrapper, which enables them to access native platform controllers. Also, a superset of JS – TypeScript, is utilized to enhance the quality of the code.

The UI is built with CSS and XML. This framework leverages the runtime with native API access. Vue.JS and Angular programmers can also unite their frameworks with NativeScript.

Ionic apps are regarded as hybrid apps, meaning that they can run on the WebView.

Hybrid applications are slower as compared to native applications because their speed depends on the WebView.

This makes clear that Ionic apps are not conventional for UI-intensive or high-performance apps like game development.

Moreover, the applications developed by NativeScript for the Android platform are larger. The large size of any application impacts performance negatively.

Ionic has a great marketplace, this tool lists various starter apps, plugins, and themes, ranging from a DatePicker to Google Maps.

Furthermore, NativeScript has its standard marketplace listing a total of 923 plugins. Then comes React Native, it does not have any dedicated marketplace from Facebook.

5) Reusability of the Codebase

Ionic wins the code reusability competition. The real concept of Ionic is “write once and run everywhere”.

NativeScript is not that far behind in terms of code reusability. NativeScript and Angular teams together have designed a native script schematic, that empowers you to create both mobile and web apps from a single project.

For React Native, you will be able to reuse the structure and logic of the components, but, you need to rewrite the UI employed in them.

React Native is way too ahead of the other two frameworks in terms of the number of contributors or the popularity of the repository. Currently, React Native consider as the most active open-source project.

Which JavaScript Mobile Framework to Choose?

You must have understood by now that all these comparisons of native script vs ionic vs react native mobile frameworks come with their pros and cons of their own.

They intended for the same objective but with different project requirements. So, picking any one of these frameworks simply depends on your project, the skills of your team, and your user requirements.

You have to choose whether you desire to hold the native languages like Java, Objective-C, Swift, and accept the lack of writing two apps and learning two things.

Or you can also choose the wrapped-app solution offered by Ionic. But if you are performance-oriented and need to access a lot of advanced native device features then you should consider React Native.

NativeScript vs Ionic vs React Native – Cross-Platform Frameworks are excellent choices for development! We need to mention here that we do not require to compare them to understand which is the “most reliable” choice.

The reason being is that it is completely subjective and depends on your project requirements and which platform adequately satisfies your needs and suits your mobile development team.

We will see more such frameworks in the coming future to assist developers in instantly developing, prototyping, and ship cross-platform applications. One example of them which is now forming a wave is Flutterby Google. 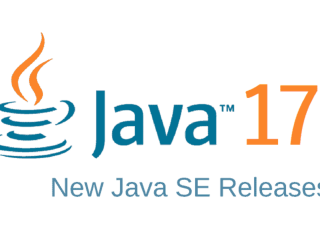